Founded in New Jersey in 1980, The Smithereens have been creating electrifying, original rock’n’roll for 41 years. Jim Babjak (guitar,) Dennis Diken (drums,) and Mike Mesaros (bass) grew up together in Carteret and lead singer, the late Pat DiNizio, hailed from Scotch Plains. The Smithereens’ take no prisoners sound, reflecting their Garden State roots, has resonated with fans worldwide over the course of 17 albums and 2500+ live shows. Studio albums include Especially for You, Green Thoughts, 11, A Date with The Smithereens, and 2011. Among their biggest hits are the rock radio staples “Blood and Roses,” “Only a Memory,” “Behind the Wall of Sleep,” and “A Girl Like You.” The Smithereens’ most recent album, COVERS, features 22 of the bands favorite songs first recorded by other artists. The band’s albums for Capitol, RCA, Sony, Koch, and eOne Records have sold over 5 million copies worldwide.

The band initially paid its dues in clubs all over the NJ/NYC area from Kenny’s Castaways in Greenwich Village to the Court Tavern and Stone Pony in NJ. They’ve since performed on stages coast to coast from the Greek Theatre in Los Angeles to the Meadowlands Arena in NJ to Radio City Music Hall in Manhattan, and internationally from Europe to Australia. Tour mates have included Tom Petty, Squeeze, The Pretenders, Lou Reed, and the Ramones, among others.

The Smithereens have also been called the architects of the alternative scene and their music has inspired and influenced generations of musicians, including the late Kurt Cobain of Nirvana, who cited The Smithereens as a major influence in his diaries.

As The Smithereens’ fame escalated, they were in heavy rotation on MTV and appeared on The Tonight Show and Saturday Night Live. Other television credits include Late Night with Conan O’Brien, MTV’s Unplugged, CBS This Morning, The Dennis Miller Show, The Uncle Floyd Show, The Joe Franklin Show, and The Arsenio Hall Show. The Smithereens’ music can also be heard in the films Bull Durham, Backdraft, Encino Man, Time Cop, Romy and Michele’s High School Reunion, Boys Don’t Cry, The Burglar, Cruel Intentions 2, Harold and Kumar Go to White Castle, and I Now Pronounce You Chuck & Larry. The band even made a cameo appearance in the film Class of Nuke’em High and other accomplishments include television and radio commercials for Dairy Queen and Nissan Maxima.

Throughout their entire career, the band members have also contributed their talents and helped raise funds and awareness to a wide range of charities, including families of 9/11, community food banks, homeless shelters, HIV/AIDS, pediatric cancer, the Jerry Lewis MDA Telethon, Parkinsons and Light of Day, and the Pat DiNizio Music Performance Scholarship at the Count Basie Center for the Performing Arts.

With the 2017 passing of Pat DiNizio, the surviving band members decided to persevere and carry on their shared musical legacy. Using rotating guest vocalists, including longtime friend Marshall Crenshaw and Robin Wilson of the Gin Blossoms, something no other band has done, they continue to entertain and rock fans all over the U.S. and the world.

In 2019, The Smithereens – Jim Babjak, Dennis Diken, Mike Mesaros, and the late Pat DiNizio – were honored by their home state and were inducted into the New Jersey Hall of Fame, Class of 2018, in the “Performing Arts” category. Previously, Babjak and Diken were inducted into the White Castle Hall of Fame for The Smithereens’ rendition of the Jim Babjak/Bob Banta composition “White Castle Blues.”

Recent releases include the COVERS album on red vinyl and CD,, a limited edition 45 of “Love Me Do” b/w “P.S. I Love You” featuring The Beatles session drummer, the late Andy White, and the green vinyl Christmas 45, “Christmas Morning” b/w “’Twas the Night Before Christmas.”

The Smithereens are currently featured in the Grammy Museum’s “New Jersey Legends” exhibit, have resumed touring, and have new music in the works, to be released in 2021and 2022. Moving forward and against all odds, The Smithereens reached a major milestone in 2021 as they celebrated their 41st anniversary and 41st continuous year as a band!

For this performance, proof of vaccination or a negative PCR COVID test will not be required for entry into the venue. Face masks are not required, but they are recommended to be worn in the theater. This policy is subject to change at any time. Please check individual shows as our policies may change depending on additional mandates from the artist’s touring manager. If you are experiencing COVID-19 related symptoms, please stay home. We welcome you to join us again in the future. 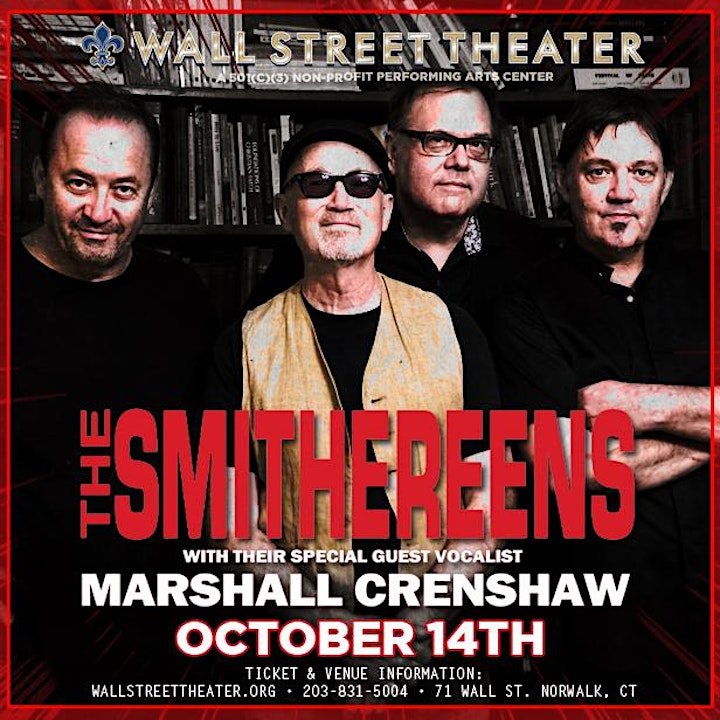