The Queers are a punk rock band who’ve been delivering fast, loud, snotty music since the early 1980s, playing the role of beer-sodden teenagers even as they’ve grown into middle age. Their tunes are recognizable for their no-frills pogo punk and purposely puerile lyrics that flaunt bad taste at every turn.

Formed in 1982, this Portsmouth, New Hampshire group ambled its way through the 1980s, recording a few singles and compilation tracks along the way, most of which were collected on Lookout’s A Day Late and a Dollar Short. Their first full length album Grow Up was released on a small English label called Shakin’ Street, which promptly went belly up after only 1,000 copies were pressed. Screeching Weasel front man Ben Weasel got Lookout label owner Larry Livermore to sign the Queers, and in 1993 Lookout released the Weasel-produced Love Songs for the Retarded. Love Songs was followed by a yearly salvo of bubblegum punk, from 1994’s Beat Off to 1996’s magnum opus Don’t Back Down.

After signing with Hopeless Records in 1999, the Queers went through various lineups as King remained the only constant. Released in 2000, Beyond the Valley… marked the first studio album since O’Neill’s death and, somewhat fittingly, was a relatively darker album than the rest of the band’s prior catalog. A string of releases followed in the early 2000s, including the Today EP, Live in West Hollywood, and Pleasant Screams. A split with Manges appeared in 2003, and the classics collection Summer Hits, Vol. 1 was issued the next fall. Recorded live during a two-day stint at Bernie’s Distillery in Columbus, Ohio, the Queers next released the aptly titled album Weekend at Bernie’s in May 2006. The record featured King joined by Teen Idols’ Philip Hill on bass and Dave Trevino on drums.

That same year, Asian Man Records began reissuing several of the band’s classic albums and in February 2007 released Munki Brain, their first album of new material since 2002 as well as commemorated their 25th year with the DVD The Queers Are Here. In 2010, the Queers issued their 11th LP, Back to the Basement. The next year they released a split 7″ with Killtime titled Alive (Gonna Puke Records), followed by 2013’s Ole Maestro, a 38-song live set recorded in Madrid, Spain, in 2009. In 2015, the trio released a limited-edition re-recorded version of Beyond the Valley… entitled Beyond the Valley Revisited. Another split 7″ — The Queers Regret Making a Record with Bassamp and Dano — arrived in 2017. 2021 brought not one but two new albums from the Queers — a typically snotty set of originals, The Queers Save the World, and their first full LP of covers, Reverberation.

The band has now set out in 2022 touring the US for their 40th anniversary.

For this performance, proof of vaccination or a negative PCR COVID test WILL NOT be required for entry into the venue. Face masks are not required, but they are recommended to be worn in the theater. This policy is subject to change at any time. Please check individual shows as our policies may change depending on additional mandates from the artist’s touring manager. If you are experiencing COVID-19-related symptoms, please stay home. We welcome you to join us again in the future. 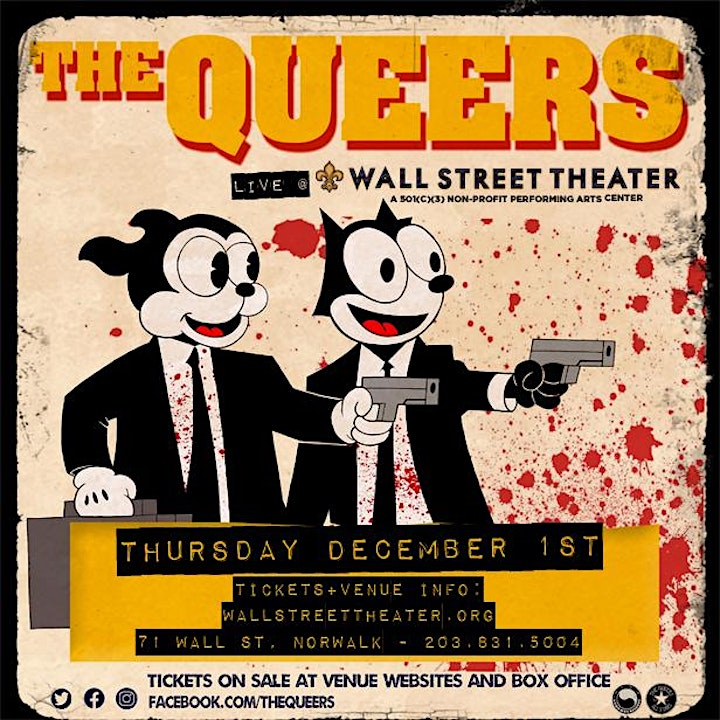