Lucinda Williams and Her Band

Make it dinner and a show with our event’s Featured Restaurant Partner, BanC House! Get 10% off when you show your tickets on the day of the show. Reservations are recommended.

“It’s all come full circle,” says Lucinda Williams about her powerful new album, Good Souls Better Angels. After more than forty years of music making, the pioneering, Louisiana-born artist has returned to the gritty blues foundation that first inspired her as a young singer-songwriter in the late 1970s. And after spending the last year on her sold-out “Car Wheels on a Gravel Road” 20th Anniversary tour, Williams has reunited with that game-changing 1998 album’s co-producer and engineer Ray Kennedy, recording Good Souls, Better Angels with her ace touring band at his Nashville studio. Joining them as co-producer is Williams’ manager Tom Overby, to whom she’s been married for a decade and who contributed lyrics to her masterful songcraft. “That’s what I always dreamed of – a relationship with someone I could create with,” Williams enthuses.

The result – Good Souls Better Angels – is the most topical album of Williams’ career. The dangerous world we live in, the constant barrage of a frightening news cycle, depression, domestic abuse, a man without a soul – and, yeah, the devil – figure prominently among its twelve tracks. “The devil comes into play quite a bit on this album,” Williams says. “I’ve always loved the imagery in Robert Johnson songs and those really dark Delta blues that are sort of biblical. I was inspired by Leonard Cohen – he dealt with that in his songs – and Bob Dylan and Nick Cave.” While, Good Souls Better Angels reflects many dark realities that surround us, the album is tied together with themes of perseverance, resilience and ultimately, hope.

As for the topicality of the material, Williams says, “Because of all this crap that’s going on, it’s on the top of everybody’s minds – it’s all anybody talks about: Basically, the world’s falling apart – it’s like the apocalypse. That’s where that Old Testament stuff comes from. It’s different from my other albums in that there aren’t the story songs about my childhood and all. It feels exciting.”

From the driving blues of the opening track “You Can’t Rule Me” to the ominous gothic “Pray the Devil Back to Hell,” from punk-blues-fueled “Bone of Contention” to fire ‘n brimstone “Drop by Drop (Big Rotator),” Williams has never been more raw and direct, with gut-punching wordplay crossing the Good Book with hip-hop with Ginsbergian beat poetry. The Williams-Overby collaborative songwriting experiment clearly has been a success. “It just happened organically,” says Williams. “Tom and I started working on songs together and he came up with some of the ideas. He gave me lines that he’d written and I took it from there. I love it because it expands things. ‘Man Without a Soul’ was his idea, and he came up with ‘Big Black Train,’ about that big black cloud of depression. When I listen to that track, it makes me cry.”

Recording live in Ray Kennedy’s vintage-equipped studio, Williams and her longtime band – guitarist Stuart Mathis, bassist David Sutton, and drummer Butch Norton – cut most of the songs in two or three takes, with the rhythm section’s rock-solid pulse and Mathis’ versatile sonic attacks backing Williams’ distinctive passion-drenched vocals. The brutal “Wakin’ Up,” punctuated by Mathis’ chainsaw guitar, viscerally details a woman’s harrowing escape from domestic violence, while the pensive “Shadows & Doubts” sheds light our quickto-judge, social media-led society and how everyone may love you one moment, but completely abandon you the next. Williams turns Greg Garing’s honky-tonk shuffle “Down Past the Bottom” into a dark-night-of-the-soul hard rocker. Tonguein-cheek irony leads the swingin’ “Bad News Blues” as Williams bemoans a plethora of “liars and lunatics/fools and thieves/clowns and hypocrites” and Mathis’ guitar work slithers around the lyrics like a snake. The bittersweet counterpoint “When the Way Gets Dark,” with its lovely melody and evocative guitar, offers hope to us all, Williams urging in her most tender vocals, “Don’t give up/Take my hand/You’re not alone.”

Williams has traveled a long road since her 1979 debut, Ramblin’ on My Mind, followed by Happy Woman Blues, her first album of originals released forty years ago in 1980. (She says that she’s still “the same girl” except that now “I have a bigger fan base and I can afford to stay at better hotels.”) Over the course of fourteen remarkable albums, three Grammy awards, and countless accolades, including Time’s Songwriter of the Year of 2001, Williams is one of our most revered artists, beloved for her singular vocals and extraordinary songs. Her recent double albums, Down Where the Spirit Meets the Bone (2014) and Ghosts of Highway 20 (2016), released on her own label, received some of the best reviews of her career.

Giving voice to all her experience, Williams ends Good Souls, Better Angels with the luminous “Good Souls,” one of the last songs written for the album. It is a deeply moving invocation: “Keep me with all of those/who help me find strength/when I’m feeling hopeless/who guide me along/And help me stay strong and fearless.”

A MESSAGE FROM WALL STREET THEATER: 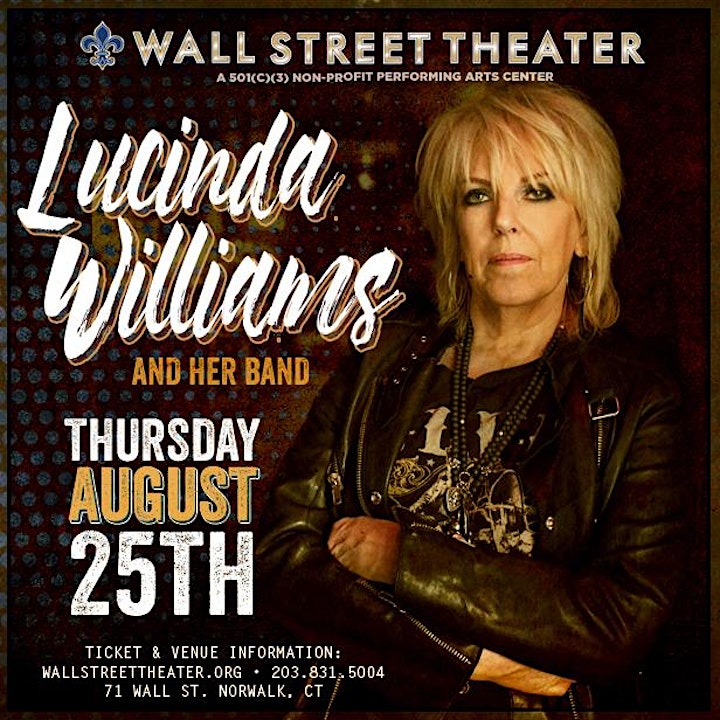