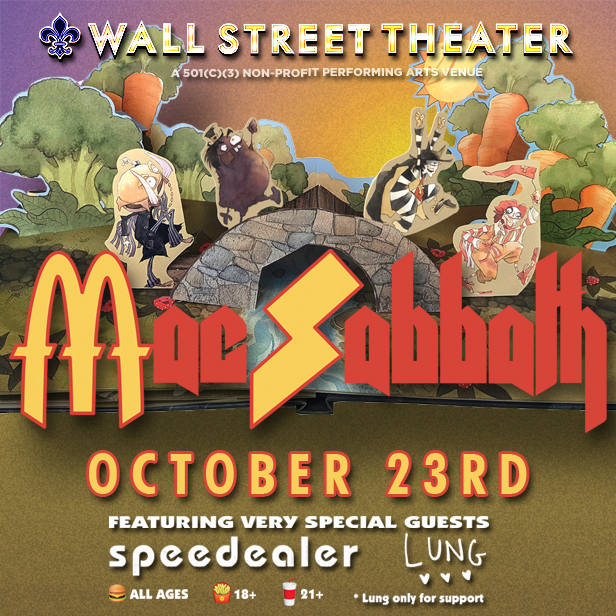 For this performance, neither proof of vaccination nor a negative PCR COVID test is required for entry. Face masks are not required, but they are recommended. This policy is subject to change. Please check individual shows as our policies may change depending on additional mandates from the artist’s touring manager. If you are experiencing COVID-19 related symptoms, please stay home. We welcome you to join us again in the future.

About Mac Sabbath and Co.

The founders of “Drive Thru Metal”. Based out of Los Angeles, California but born from the bowels of Outer Space… Mac Sabbath is here, and it is time for a dinner rock revolution. Starring: Ronald Osbourne , Slayer MacCheeze, Grimalice (aka “I Can’t Believe It’s Not Butler!”), Catburglar (aka “Glamburglar” and “Peter Criss Cut Fries”).

Speedealer originally formed in 1992 in Lubbock, TX. under the name REO Speedealer. Its founding members are James Follis [who named the band] (guitar), Rodney Skelton (bass), Jeff Hirshberg (vocals), and Chris Brown (drums). By early ’93 REO Speedealer had run its course and broke up. Both Skelton and Hirshberg decided to return to Dallas, while Follis and Brown remained in Lubbock. Upon their return, Skelton, Hirshberg (now on guitar and vocal duties), Mike Noyes (guitar), Dave Woodard (vocals) and Jason Purtle [RIP]/Toby Sheets (drums) reformed the band. REO Speedealer began to play local and regional shows, which in short order turned into DIY, “get in the van,” touring on the national level. In the fall of 1995 the band released its first eponymously titled full length record on Lori Barbero’s (Babes in Toyland) label, Spanish Fly — directly after the release of the record, Woodard split from the band.

The following year the group signed with Royalty Records, and it was at that time that the band began touring nonstop, worldwide, playing over 300 shows per year for the next eight years. 1996 also found the guys in the studio with producer Daniel Rey (Ramones, Gang Green, White Zombie, The Misfits, et al.) recording their second self-titled album. Shortly after the record’s release in ’97, REO Speedwagon served the band a cease-and-desist order on their moniker. As a result, the band shortened its name to Speedealer. And in the subsequent year, after the departures of drummer Todd Mcglaughlin and guitarist Noyes, the foursome — now consisting of Hirshberg, Skelton, and newly added drummer Harden Harrison (Rigor Mortis) and guitarist Eric Schmidt (Pervis) – recorded and released the Daniel Rey produced Here Comes Death. Just as the album hit the streets, Royalty Records folded, leaving Speedealer without either a label or support for their new record.

The band continued its intense touring schedule, pairing up with acts such as Motörhead, Fu Manchu, The Misfits, Neurosis, and GWAR. After their 1999 performance at SXSW, Palm Pictures A&R representative Michael Alago (who signed Metallica to Elektra) contracted the band to his label. Palm Pictures re-released Here Comes Death in 2000, as well as putting out the band’s fourth studio album, Second Sight (produced by Jason Newstead of Metallica), in 2001. Early in ’02, Speedealer parted ways with Palm Pictures. During that same year founding member Rodney Skelton left the band; and in 2003 Casey Orr (GWAR, Ministry, and Rigor Mortis) took over on bass and Speedealer recorded and released both Bleed (produced by Jeff Pinkus of The Butthole Surfers, Honky, and The Melvins) on Dead Teenager Records and Burned Alive (recorded live at CBGB, produced by Daniel Rey) on Radical Records.

Following their European tour in the summer of 2004, Speedealer ceased existing as a working, full-time band — though between 2008 – 2012 members would from time to time play one-off shows, that is until Hirshberg decided in the autumn of ’12 that he no longer wished to play live. However, in 2016 Schmidt and Harrison partnered with vocalist Daniel Barron (Swingin’ Dicks) and bassist Rick Pearson (The Buck Pets), reestablishing the band. And on November 6, 2018, Speedealer, along with Hirshberg, entered into Sonic Dropper Studio with Daniel Rey and Jim King at the helm to record its sixth studio album, Blue Days Black Nights (self-released May 6, 2019). Speedealer is currently touring in support of Blue Days Black Nights.

Lung has a sound that is dark and commanding, evoking the driving sludge of early grunge with layered sinister undertones. The band is Kate Wakefield, a classically trained opera singer, and Daisy Caplan, formerly of Foxy Shazam, Babe Rage, and Ayin. Playing shows from Nelsonville Music Festival to famed DIY venues like 924 Gilman Street, Lung have made their presence known and developed the reputation as a “must see” band. Since their first performance in April 2016, the pair have played over 500 shows across North America and Europe.

When able to tour, Lung lives out of the van for most of the year. The band chooses to play in all-ages, non-bar venues as much as possible because it’s a part of their conviction that all people deserve access to art/music. Lung has shared bills with Le Butcherettes, Screaming Females, Big Business, Brainiac, Swearing At Motorists, Fucked Up, Priests, The Messthetics, Machine Girl, Shellshag, Clap Your Hands Say Yeah, Hawthorne Heights, Downtown Boys, and Street Sects.

Touring heavily in 2019, Lung traversed Europe and headlined a US tour. Lung was poised to headline a two month run when the pandemic started. In the unexpected downtime, the band managed to author and record an entirely new album, Come Clean Right Now, out on August 20, 2021. They are set to play Treefort Music Festival 10 in March 2022 and head out on a US tour supporting Mac Sabbath in Fall 2022.