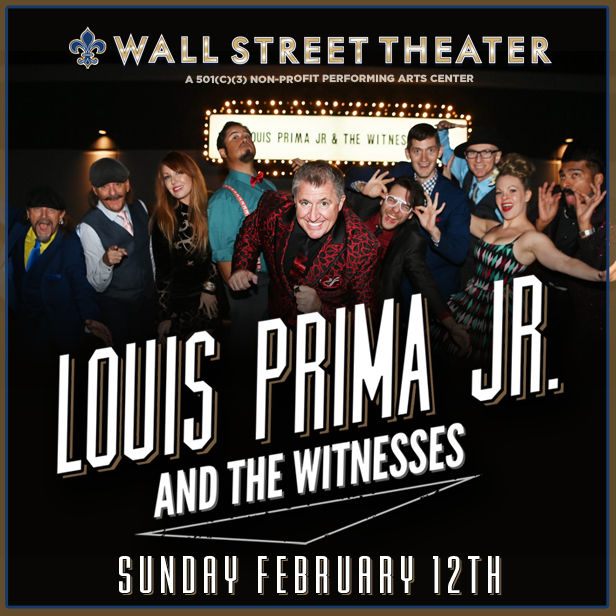 “A high- powered show... People were literally dancing in the streets.”

About Louis Prima Jr. & the Witnesses

Louis Prima Jr. and The Witnesses are a boisterous, horn-driven, 10-piece New Orleans-style band known for their energetic performances that raise the roof and bring audiences to their feet. Their eclectic, rowdy style crosses several genres, from big band and swing to rock and blues, combining original music from their two albums with tail-shakin’ and foot stompin’ favorites from the five-decade career of Louis Prima Sr. With the band’s collective talents and diverse musical tastes, their shows have a sound that is unique, while staying true to the vintage Prima style.

Music critics have described Louis Prima Jr. and The Witnesses as “changing the face of ‘big band’ music by combining facets of swing, rock and soul and packing it into one giant punch,” “unafraid to breach the vast divide between the golden age of jazz and big band music and hard-hitting rock and roll” and taking “the robust, swinging jump-blues style of his father and [driving] it up a notch with a contemporary energy of his own.”

Louis Prima Jr. and The Witnesses were formed in 2006 and have been performing to sell-out crowds around the world ever since. Less concerned about reliving the past than about creating a future, the band brings new energy and a current attitude to audiences with what has been called “the wildest show this side of the 60s.” Since their over-the-top breakout performance at the New Orleans Jazz and Heritage Festival, Louis Prima Jr. and The Witnesses have performed everywhere from Seattle to Palermo, from casino showrooms to music festivals and from small clubs to large performing arts centers.

“Blow” captures the energy and wild fun of a live show with 11 tracks including eight original songs written by Prima Jr. In its first week, “Blow,” which was recorded at Capitol Records, was the most-added album on American jazz radio and debuted in the CMJ Jazz Chart’s Top 25 and the iTunes’ Top 15 jazz.

Prima Jr. is the son of legendary entertainer Louis Prima, known for his New Orleans-flavored music and lively performances. Prima had a career that spanned five decades and included record-breaking contracts to perform in Las Vegas where legends such as Frank Sinatra, Elvis Presley and Louis Armstrong would regularly jump on stage with the entertainer and his band. His popularity was so great at one point that he was asked to perform at the inauguration of John F. Kennedy. His classic “Sing, Sing, Sing” was inducted into the Grammy Hall of Fame, he won the first ever Music Group Grammy for “That Old Black Magic” and his classic “Jump, Jive ‘an Wail” went on to start a swing revolution in the 90s.

LOUIS PRIMA JR. AND THE WITNESSES

“Like his father, Prima, Jr. is a talented entertainer whose jocular vocals led much of the action… it catapulted the sound into the present and these stunning Witnesses enjoyed numerous featured spots as vocalists and instrumentalists. Tireless doesn’t begin to describe each perspiration-filled moment.” – New York City Jazz Record

“Louis Prima Jr. has breathed life once more into the golden age of jazz music, and in so doing has fused the genre with rock and roll in a way that’s never been done before.” – Republic of Jazz

“It’s feel-good music of the highest order. Prima Jr. takes the robust, swinging jump-blues style of his father… and drives it up a notch with a contemporary energy of his own.” – Pop Culture Classics

“You could take this music 50 years into the past or future and it would be just as vibrant and just as relevant to either audience.” – Rust Magazine

“Prima Jr. passionately protects the Prima legacy. The son has a lot of the energy of his father, bounding around stage, wound up like a tight coil. It was a rousing performance.” – Las Vegas Sun

“Louis Prima, Jr. and the Witnesses are changing the face of ‘big band’ music by combining facets of swing, rock and soul and packing it into one giant punch! …LPJ and his incredibly talented crew of musicians has so much unbridled energy, it’s infectious.” – Rock on Request Magazine

“[The Witnesses’] synergy and sense of chronology reminds us a lot of the live stage dynamic of Frank Zappa.” – Rust Magazine

“Louis Prima, Jr. turns up the heat a few notches while adding a few blisters here and there along the way… The musicianship of the performers is high caliber.” – LABest.com

“An ensemble that respectfully pays homage to its namesake yet is not afraid to step out of its comfort zone and innovate… venture into the uncharted territory of fresh original material, and they come out a winner.” – Breakthru Media Magazine

“Louis Prima Jr….has a wicked band backing him up… The fact that he has his father’s blood running through his veins pretty much had me sold as far as his taking on his father’s work and giving us something new.” – Shakefire.com

“Prima and the Witnesses revive a boogie-woogie spirit for the modern generation… a new legend is being born, and it’s about to BLOW you away.” – Retro Kimmer

“Prima Jr. is the crown prince of swing… His high-energy band seems bursting at the seams.” – Examiner.com

“Louis Prima Jr. … [has] serious swing chops and dynamite entertainment value, just like his old man, without a doubt…. a New Orleans jazz-soaked trumpeter like his dad… Louis Jr. takes the Prima family lineage into the 21st century.” – The Philadelphia Inquirer

“A rip-roaring, jump-jiving time……. The… swingster is more than just an entertainer. He plays a mean trumpet, as well as piano and drums, and emulates his father to a tee.” – NJ.com

“Louis Prima, Jr. shook the crowd up with the same kind of infectious fun and stagecraft that had been his father’s trademarks.” – That Old Black Magic

“It’s a show with an infectious energy.” – Dailyfiasco.com

“Louis Prima Jr. performs the music of his father with a fresh youthful energy, while keeping true to the roots of the music — it’s vibrant, energetic and makes you just want to get up and dance.” – Vegasnews.com

“Louis Prima, Jr.’s show was outrageously fantastic. Incredible energy, exciting music; they should have a permanent spot on the Strip.” – Robin Leach