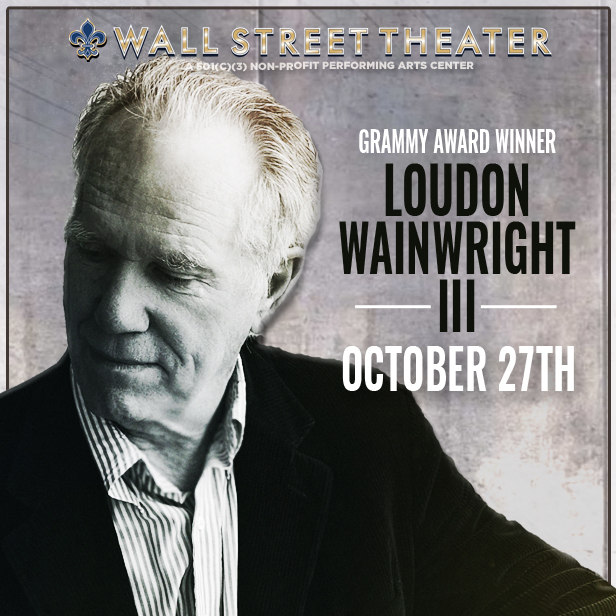 Loudon’s singular talent as our foremost six-string analyst and tragicomedian extraordinaire is not only undiminished, but hitting new heights of what NPR calls his “unmatched wit and wisdom” on Lifetime Achievement.

He’s referring to the age he recently turned, as well as “How Old Is 75?” one of the many beautifully reflective songs on his latest release Lifetime Achievement. Milestones aside, the truth is that Loudon has always been a keen observer of his own aging process, documenting it with an honesty that few songwriters would dare use.

“I’ve kind of been obsessed with my numbers all the way along the line, you know?” Loudon says. “I have a song that I wrote in 1972 called ‘New Paint,’ which is about a guy trying to pick up a girl in a park, saying ‘If I was sixteen again.’ I wrote that when I was twenty-five. I had ‘Watch Me Rock, I’m Over Thirty.’ I had a song, ‘The Birthday Present,’ that I sang a capella in a shower about hitting age 50. So 75 is a new number, but it’s just another number.”

Maybe, but what makes it remarkable is that after thirty albums, countless concert appearances, a Grammy, many film and TV roles, and songs recorded by such artists as Johnny Cash, Mose Allison, Bonnie Raitt and his son Rufus, Loudon sounds as engaged and passionate as ever. His singular talent as our foremost six-string analyst and tragicomedian extraordinaire is not only undiminished, but hitting new heights of what NPR calls his “unmatched wit and wisdom” on Lifetime Achievement.

“I had a very romantic idea when I began that I would be dead by the time I was 25,” he admits with a smile. “Just because that sounded so cool and groovy and dangerous. I’m happy it didn’t work out that way. When I think about the fact that I’ve been doing this for half a century, it’s kind of incredible. The place I played at last night, I played fifty years ago. It’s encouraging in a funny kind of way – that it’s gone on this long and it’s still a lot of fun. The performing part of it, and the mysterious thing of getting to write a new song. After the doldrums of the past two years, I had a creative burst in the last year, and that felt good. It was something to build a record on.”

The opener “I Been,” a rapid-fire list of ampersand-joined verbs (“I’m fussin’ & frettin’, I’m underpants wettin’, after all I’m just a man”), acts as a breezy news update. It tells us right away that Loudon is the same flawed, lovable curmudgeon as ever, though now one with his eye on mortality, “telling the truth” and “figuring out a way to live one more day.” And it’s that feeling that brings depth and lump-in-the-throat tenderness to songs like the a capella “One Wish,” the time displacement nostalgia of “Back In Your Town,” and the accordion-laced “It Takes 2,” which reframes one of his classic songs in the line, “’One Man Guy,’ it’s a lie, these days it takes two.” In “Family Vacation” the hell is not just Sartre’s “other people,” but our “kith and kin.” It reminds us that his humorous songs can both make you burst out laughing and sting on contact (“Brother and sister, we’re playing Twister / It’s a cover up to keep ourselves hid”). The bluegrass-flavored stomper “Little Piece of Me” examines a life spent on the road (“I leave a dollop here and a particle there / and I’m stripteased down to my underwear”) and the title track gets honest about the true meaning of the singer-songwriter’s long journey.

Of that track and the album’s title, Loudon says, “At this point in my life, three score and ten plus, I’m thinking, ‘What have I done? Have I wasted my time?’ And I’ve wasted plenty of time. I have written a lot of songs too. Maybe I should’ve written more. Whatever. There’s that thought. And you’re also aware that the time is running out. I think that’s what informed the title. So the idea is the big stuff. But the thing that I want, that we all want – and I hesitate to say this (laughs) – is love. The loving cup engraved in love.”

The album was recorded with love by two of his longtime producers, Dick Connette and Stuart Lerman. “They both have the invisible touch,” Wainwright says. “We started at Dick’s studio in lower Manhattan and worked for two days, with just me singing the songs and playing the guitar. Then we went to Stuart’s studio, Hobo Sound, in Weehawken, New Jersey, and we added things. The record has some production on it, but a lot of it is kind of acoustic-driven. When I bring in musicians and singers, I give them very little instruction. The people that we chose for this record we’ve worked with before – Chaim Tannenbaum, David Mansfield, John Gale, David Forman and Tony Scherr. They know exactly what we want. We know who the great players are, and we’re just excited to have them in the studio and they don’t disappoint.”

And Lifetime Achievement doesn’t disappoint, especially for those of us who still like to experience albums in a more traditional way. “This could be something that somebody could get in their car and drive to their sister’s house for dinner and have a 40-minute sonic experience,” Loudon muses. “That’s how I think about it. That’s why when we make these records, we spend a lot of time sequencing and thinking how songs fit together. People don’t listen to music this way, I’m told, but it’s the way that I like to listen to music.”

With a full tour itinerary for 2022 already in place, Loudon is looking forward to taking the new songs onto the stage. Looking back on a legacy the New York Times calls “rich, complicated and often surprisingly dark,” he says, “I remember when I made my first record for Atlantic in 1969. I was always saying, ‘I want to make a voice and guitar record, and I want it to be a record – not only a recording, but a document that captures a moment.’ I was 21 and very serious, and I thought I’d be dead in four years (laughs). So I wanted to make something that would last. A testament. Now, fifty years later, I guess I still want to make a testament. I want to write a group of songs and get them down in the best possible way. And I like to think they might last a while.”