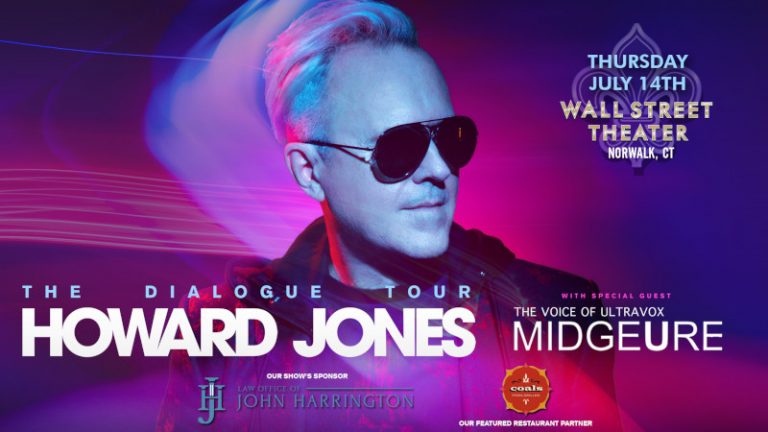 Make it dinner and a show with our event’s Featured Restaurant Partner, Coal’s Pizza! Buy 1 drink, get 1 free when you show your tickets.

New wave icon/synth pioneer Howard Jones is hard at work on a new studio album; DIALOGUE is set for release this summer. DIALOGUE is the third album in a trilogy of electronic releases from Jones with multi-media project ENGAGE coming out in 2015 and studio album TRANSFORM out in 2019. More information about DIALOGUE is forthcoming.

Of the upcoming tour, Jones commented, “I am beyond excited to be touring the US this summer with my great friend Midge Ure. As we take safe steps to put the pandemic behind us, the tour will be a celebration of being together, enjoying the power of live music again. Expect plenty of hit songs as well as cuts from my new album DIALOGUE”.

Midge Ure added, “What a joy to be touring North America with my friend Howard Jones again. With the emphasis on technology, quality and performance I am looking forward to dusting off the synthesizers, cranking up the guitar and playing with the brilliant musicians who will be sharing the stage with me. We first collaborated live together back in 1989 on Howard’s ‘Cross the line Tour’ which holds nothing but great memories for me, so I am hoping to not only rekindle those but add new ones to the memory bank”.