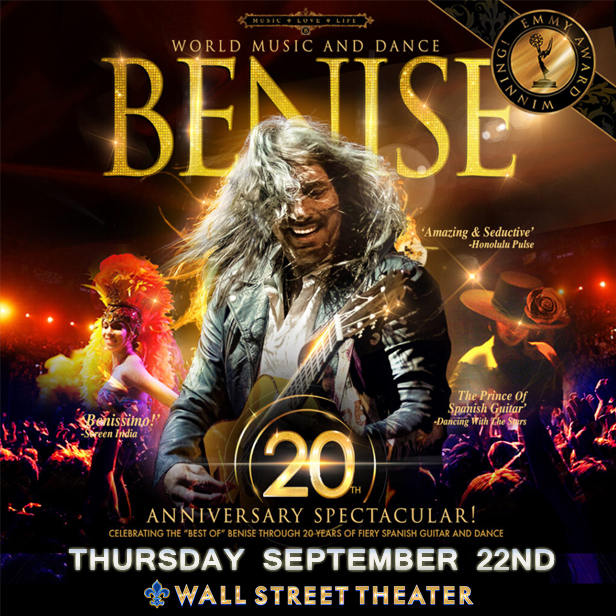 It’s going to be one hot night as Benise celebrates 20 years of fiery Spanish guitar music and dance!

For this performance, proof of vaccination or a negative PCR COVID test, taken no more than 72 hours prior to the show date, is required for entry into the venue. Face masks are not required, but they are recommended to be worn in the theater. This policy is subject to change. Please check individual shows as our policies may change depending on additional mandates from the artist’s touring manager. If you are experiencing COVID-19 related symptoms, please stay home. We welcome you to join us again in the future.

Benise (pronounced Buh-nes-say) shattered the mold of Spanish guitar by combining music and dance – the only show of its kind!

2021 marks the year that Benise, “The Prince of Spanish Guitar,” debuts his 5th national PBS special Strings of Hope and launches his 20th Anniversary Tour. Armed with his Spanish guitar and a stage full of musicians and elaborately choreographed dancers, Benise takesß the audience on a musical journey through Spanish Flamenco, Cuban Salsa, Brazilian Samba, Parisian Waltz, exotic drumming, and more!

For Benise, music has always been a journey. From his humble beginnings as a street performer, to being featured on the #1 rated show in the USA – Dancing With The Stars, and performing around the world. “I wanted to push the boundaries of Nuevo Flamenco/Spanish guitar while combining the elements of dance and theater. This show is a celebration of all the shows we’ve done over the last 20 years,” comments guitarist and creative force behind the event, Benise.

The Emmy Award-winning composer along with an international cast of musicians and dancers will entertain audiences with a two-hour show that “is an escape from all of their problems,” Benise says.

“Much like the recent PBS special Strings of Hope, with this show I want to take the audience on an escape…to a beautiful Spanish courtyard filled with Flamenco dancers, stunning costumes, and fiery Spanish guitars. Beyond the new material, BENISE says “the live show will incorporate some fan favorites from my street performing days and rock classics like Led Zeppelin’s Kashmir and AC/DC’s Thunderstruck.”

BENISE adds, “This is a great show for the whole family; I really think we have something for everyone. I hope people will be inspired by our story, by the music, by the production–and have the passion to follow their own dreams. I have always been a gypsy and love to travel, my heritage is Bohemian (from Prague), so I think it’s in my blood. I can’t wait to go to new cities, meet new people, and play every night–it’s what I live for.” The Theatrical World Music and Dance spectacle that has been called “The Latin Riverdance”

Rarely is an artist capable of touching the hearts and souls of people of all ages, cultures, and diverse musical backgrounds as BENISE (pronounced Buh-nes-say).

‘The Prince of Spanish Guitar’ – Dancing With The Stars

Since the age of eleven (when he received his first guitar), BENISE practiced relentlessly, completely self-taught, mastering a variety of different styles that were eventually to become his own unique sound. Though unable to read a single note, he began composing original works with powerful emotional arrangements that are both wild and refined, producing a sound that is as edgy and exotic as it is romantic and sensual. “I’m always inspired by places I’ve traveled,” says BENISE, “so I’ll try to capture the essence and beauty of the different places in my melodies. It’s truly like painting on air–creating colors and lush soundscapes that take people (and me) away to a safe place with no prejudice and no boundaries.”

Leaving his family and friends in the Midwest to move 1500 hundred miles away from home to Los Angeles with nothing more than his guitar, he held in his heart the encouragement from his parents to “work hard and have faith.”

After being turned down by almost every club in Los Angeles, BENISE started performing on the streets. It was not uncommon for BENISE to put on over 200 shows a year, sometimes playing 2 to 3 events in a single day. Tourists from around the world and native Angelinos alike took to BENISE like the “Pied Piper” of Spanish guitar. From there, the path of his music took on a life of its own, effortlessly opening doors along the way to attract musicians, dancers and cirque performers, eventually creating the extended family that is now known simply as his namesake, “BENISE.”

In addition to organizing stunning live shows, BENISE took his career by the reins by producing, arranging and releasing 15 albums on his own independent record label, Spanish Guitar Entertainment, plus 6 DVDs. The recordings capture the expressive Spanish guitar arrangements that stem from influences around the world, carrying listeners to such culturally rich destinations as Spain, Africa, Brazil, the Mediterranean, Cuba, India and Egypt.

Combining the Cultures of the World through Music and Dance!